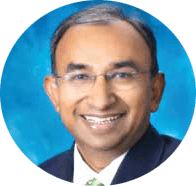 Motivational Speaker, Leadership Coach Author of Bestsellers (The Habit of Winning and The Secret of Leadership)

After spending nearly three decades working with teams selling everything from soaps and colas, to yellow pages and diapers, Prakash has chosen to step out of the corporate world and pursue his passion for writing, speaking, and helping other people unleash the leader within each of them.

Prakash was until recently the Managing Director of Kimberly-Clark Lever and was earlier the Managing Director and CEO of Infomedia India Limited (formerly Tata Infomedia). Prior to that, Prakash was Executive Director at PepsiCo, responsible for the company’s operations in South India and Sri Lanka. He later moved to PepsiCo China as Regional Vice President. An alumnus of IIM Ahmedabad, he started his career with Hindustan Unilever Limited.

Passionate about cricket – and people – Prakash is also a trained leadership coach. He speaks and writes extensively on motivation, leadership, teamwork and winning. His first book titled The Habit of Winning was published by Penguin in 2011. It was shortlisted for The Economist Crossword Popular Book Award, and has been translated into seven languages. His second book – The Secret of Leadership – was published in 2013. Both books are national bestsellers.

His last assignment was with ICICI Prudential AMC, as Senior VP & Head – Retail Business where he was responsible for sales, distribution and product development of Mutual Fund, PMS and Real Estate offerings through retail distribution, banking and private wealth management channels across India and UAE.

Aashish holds a Bachelor of Engineering in Polymer Science and a Masters in Management Studies in Finance from NMIMS, Mumbai.

Manish, has more than 15 years of experience in the Indian Capital Markets and founded Vallum Capital, investment management and advisory firm in 2010. Prior to founding Vallum, he has worked at VP & Portfolio Manager (Equities) with ING Investment Management in India and has worked with the organization for close to 6 years, managing and advising equity assets worth more than US$ 500 mn. Prior to joining ING that he has spent 6 years as sell side analyst with his last job with HDFC Securities, as a sell side analyst. He is regular contributor of articles to Outlook Business, ET various newspaper in India and overseas. He wrote a monthly series “Charm of India” for Nikkei Business, Japan for over three years.

George has an overall experience of 12 years across industries, especially in the equity and capital markets space. He has worked with firms such as DSP Merrill Lynch Ltd, Wipro Ltd, Metlife India Pvt Ltd and Cholamandalam Investment & Finance Co Ltd. and during these assignments he has managed equity funds and done equity research as well.

George is an Associate Chartered Accountant and an Associate Cost and Management Accountant. He has done his graduation in Commerce, English Language & Literature from Calicut University.